What does it mean to be back in Darien at the age of 23, to have the architecture of my days once more be molded by the place where I grew up? To begin to answer that question I recently reread an essay I wrote at the close of my first semester of college. The essay, which I titled “Commonplace,” verbalizes my then-newly crystallized belief that the places we are most familiar with on a day-to-day basis have the potential to yield the most profound insights and discoveries about the world at large. In “Commonplace,” I recall a bike ride to a local beach one cloudy September Saturday during my senior year of high school:

Long Island Sound was a drab, grey monochrome. The unbroken clouds overhead sapped the trees of any bright hues. A wind blew off the water, just crisp enough to forebode a change in seasons. In short, it was the type of day my suburban neighbors would use as an excuse to stay inside and do chores around the house. But, standing there alone on the sand, looking across to the opposite shore of New York, the thought came to me, “How could I ever turn my back on this?”

Because it is scenes like this, times when the world shows its capacity for the unabashedly mundane, that catch me the most. My earliest vivid memory rooted in the coastal Connecticut landscape where I grew up is of swimming in a neighbor’s pool with my brothers and some family friends one summer evening and insisting that everyone look at a sunset-streaked cloud that happened to be passing directly overhead. I was interested not in the sunset itself, but that one small stratus cloud, brushed with pink and purple. As I got older, no matter what interests took hold of my attention and state of mind, I always found time to stop and contemplate the perfectly commonplace interplay of the naked natural world and the built, suburban environment I called home. And in those mundane scenes and moments, sometimes as unremarkable as a dull orange twilight horizon set against a foreground of dusky houses and maple trees, I have found sources of wonder comparable to looking across the Grand Canyon or out at a panorama of the Rocky Mountains.

Where I grew up is in many ways a mundane place, easily written off as a mere bedroom community where an absence of definable local culture is paralleled by a lack of distinction in the natural or ecological sense. My town’s woods, where they exist parceled between roadways and residential development, do not erupt with orchids and wildflowers in the spring, nor are its horizons animated with the melodrama of snowcapped sierras. Yet it is precisely this mundane landscape that has left an imprint on my psyche. It was amid the suburban spread I called home for the first eighteen years of my life that I learned to appreciate not just the occasional scenes of ostentatious natural beauty, but also the world in its simple, unremarkable manifestations, be they a mellow twilight or a cloudy, colorless day at the shore. 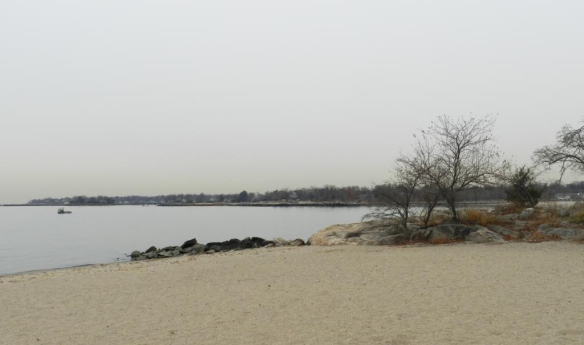 I typed those paragraphs five years ago. I had no idea then in the fall of 2013 the scintillating path I would take in the next stage of my life: two brain surgeries, hearing loss, a season of peripatetic farm work, two experimental rounds of chemotherapy, and a bout of major depression. And I am still working towards my college diploma. Darien and my parents’ house on Thomasina Lane has remained a constant this whole time, and that constitutes a generous mercy. Any measure of stability is helpful in a time of transition and turbulence.

Yet I am grateful for my anchorage on the north shore of Long Island Sound not just because of the consistency it has provided. In “Commonplace” I conclude:

On that grey September day at the beach, I did eventually turn my back and let my future take me wherever it may. Because these moments of mystery and silence are not exclusive to a pebbly stretch of New England coastline. Rather, they exist everywhere and every day as the inherent beauty of this world.

The knowledge that profound insight – mystery and silence – are present everywhere has sustained me on a spiritual level through my setbacks and disappointments these past five years, and by regularly returning to Darien I have kept that knowledge fresh.

I don’t mind that I never got a chance to study abroad or spend a summer backpacking through the latest haute ecotourist destination; I don’t need mementos from far-flung places to make my life richer. Through the first 18 years of my life, followed by all of my recent convalescences and languid vacation days away from school, the shingled rooftops and hardwood woodlands of Darien have been the stuff of my world, just as cattle paddocks and baobab trees are the stuff of a Herero’s world, or freeway underpasses and chaparral hillsides are the stuff of a southern Californian’s world. Wherever you happen to make your life, there are layers of discovery waiting in the cracks between the most unassuming features of our natural and human landscapes.

Several years ago while walking in Darien’s Woodland Park I picked my way through underbrush and encountered an army of shrimp-like arthropods marching across a scummy pond margin. Last summer I kayaked to a cove in neighboring Stamford and explored 1-acre-square Vincent Island, where the mason shell of a house that burned down before I was born is being swallowed by poison ivy and other sun-loving herbaceous plants. I don’t have as much time to explore the woods or go kayaking this summer, but only a few days ago, on a visit to Darien Town Hall, I saw a justice of the peace presiding over an outdoor civil wedding ceremony between a young couple dressed in shorts and t-shirts. These are the sorts of discoveries that lie in wait if one chooses to interrogate the commonplace and see what happenings unfold behind the static of the day-to-day.

While I could sigh with regret or resignation that I am now well into my third decade of life and still bound to the address where I grew up, I don’t really feel regretful or resigned. I will leave Darien for good at some point then end up in a new locale whose commonplace is just as fertile as any other. But in the meantime I can explore the endless crevasses and cul-de-sacs of my immediate environs.

This site uses Akismet to reduce spam. Learn how your comment data is processed.