When the Manor house was refurbished in 1908, Cornelia Conway Felton Horsford, the mistress at the time, chose to embellish the front parlor’s fireplace with delftware tiles – an apparent nod to Nathaniel Sylvester’s upbringing in seventeenth century Amsterdam’s community of exiled English Separatists. The parlor delftware constitutes one of the more visible attestations to the Sylvester family’s time in the Dutch Republic. When a team of historical archaeologists from UMass-Boston began excavating the Manor grounds in the 1990s, they unearthed a surfeit of Dutch-made tobacco pipes and yellow bricks that resembled the bricks fired in Gouda kilns.

I am interested in the Netherlands of the 1600s. One could argue that the global order of things as we know them today – our world of intercontinental commerce, service-oriented economies, and staggering material wealth, all powered by growth-based economics and investment capital – was first realized in the damp, peaty lowlands of the Rhine delta at the turn of the seventeenth century. Intriguingly, Yale anthropologist James C. Scott also speculates that the year 1600 marks the point in world history when the concept of ‘the state’ came to predominate human social organization. It just so happens that no state at that time had a wealthier population than the Dutch Republic.

Nathaniel Sylvester’s parents, Mary and Giles, migrated with their Separatist families across the English channel to the relative safety of Amsterdam in the first decade of the 1600s. By Nathaniel’s birth in 1620, Giles was a well-regarded member of the Ancient Church (Englelse Kerk) and an up-and-coming merchant in a country that was willing to out up with foreigners and religious iconoclasts rejected by the rest of Europe. As such, the Amsterdam Nathaniel grew up in was one of satin-clad housewives and colorful row houses fronted by spotless stoeps which resounded with the raucous footsteps of children engrossed in neighborhood play. It was a port city from which more than 100 merchant vessels might disembark and set sail across the IJsselmeer in a single day. Such an ’embarrassment of riches,’ as Simon Schama puts it, was made possible by the Dutch Republic’s subordination of Spain and Portugal in the realm of Atlantic shipping. Absent the mercantilist royal bureaucracies which helped contribute to the demise of Iberian transoceanic hegemony, Dutch exploits in the New World and Asia were financed primarily by private investors via joint-stock companies – the forebears of today’s transnationals. Raised amidst so much commercial ferment, it is unsurprising that Nathaniel and his four brothers followed their father into the merchant trade.

All of the Sylvester sons returned to the English fold, either settling in Britain or one of its colonies just as the English began challenging Dutch turf. Yet part of the Dutch Republic’s inheritance in wealth came with an unquantifiable human cost, a cost that the Sylvesters were also complicit in exacting: by the 1600s, the Dutch were the most active European slave traders. Northern Europe’s growing taste for sugar shifted the flow of African slaves northward from South America to the French and English-dominated Caribbean, where Constant Sylvester, Nathaniel’s older brother, established a Barbadian sugar plantation. Nathaniel then acquired the 8,000 acres of Shelter Island in order to establish a plantation of his own for the purpose of provisioning his brother’s operation with horses, salted beef, and any other goods that could not be produced in a tropical colony whose entire bonded work force of several thousand was engaged solely in the production of a sweetener.

This is to say nothing yet of the presence of slaves at the Manor (upon his death, Nathaniel Sylvester bequeathed 23 enslaved Africans to his wife, Grizzell, and their children); the marginalization of Indians on Long Island’s East End (the system of debt bondage and impressed Manhansett/Montaukett labor under the Sylvesters was slavery in all but name); or the wealth inequality among Europeans themselves as a new economic order took shape (1600s Amsterdam had its districts of grinding urban poverty, while Sylvester Manor possessed its share of indentured servants from the British Isles). But it is not my purpose here to recount every human injustice associated with Sylvester Manor’s past – as I have already noted, the human toll of the patterns of commerce and statecraft born in the 1600s is beyond quantifying.

Instead, I wish to reflect on how Sylvester Manor serves as a relatively intact index of the social trends and revolutions of the past 400 years whose cumulative effects are manifesting in what I like to refer to as the Crisis of Now – the interlocking environmental, economic, and spiritual emergencies that define the 21st century. Despite the Manor’s bucolic rural character, it took the labor and wealth extraction on the margins of three different continents (four, if South America is included) to make its existence possible. Now, in 2018, the infamous Triangle Trade of the Atlantic has evolved into the globally-connected society in which we all are enmeshed, and Sylvester Manor is one of many regional nerve centers that were vital in catalyzing that transformation.

So it is that when I look across the north lawn towards the white wooden gate and Gardiners Creek, I find it impossible to ignore the global reach of these 240 acres on the edge of North America. The white gate, which now opens onto a land bridge, marks the landing where barges and longboats unloaded wares from Europe for Nathaniel Sylvester’s provisioning operation before loading Barbados-bound cargo. In the wake of those ships of yore, I try to discern the skeins of connective historical tissue that link this place with the slave castles of the Guinea Coast and the tribal councils of Eastern Algonquian tribes just as much as with the windmills of Holland or the sheep pastures of Somerset. Here multiple human trajectories and the fates of nations collide, and today our lives are thoroughly etched by that collision. 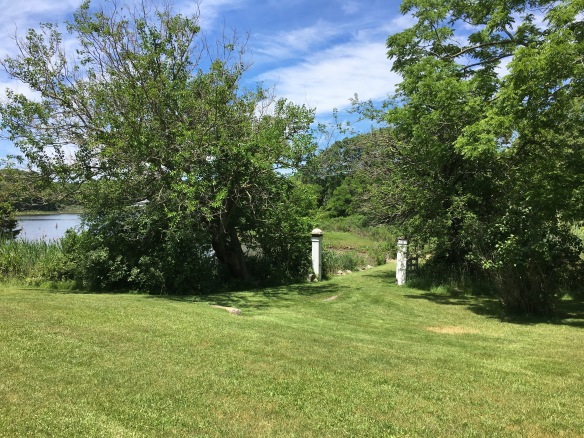 This is intellectual rumination, an attempt to make sense of the entanglements of the injustices of the past with the lives of the 7.5 billion humans living right now. These are not jolly thoughts to be preoccupied with, but I believe that parsing and understanding the knotted interface of past and present is necessary if we are to see through our converging global crises. And from deposits of yellow Dutch bricks to a burial ground for the enslaved, from archived documents bearing the signatures of Long Island sachems to parlors decked out in cosmopolitan colonial opulence, Sylvester Manor offers a unique vantage point from which to begin that work of belated comprehension.

This site uses Akismet to reduce spam. Learn how your comment data is processed.